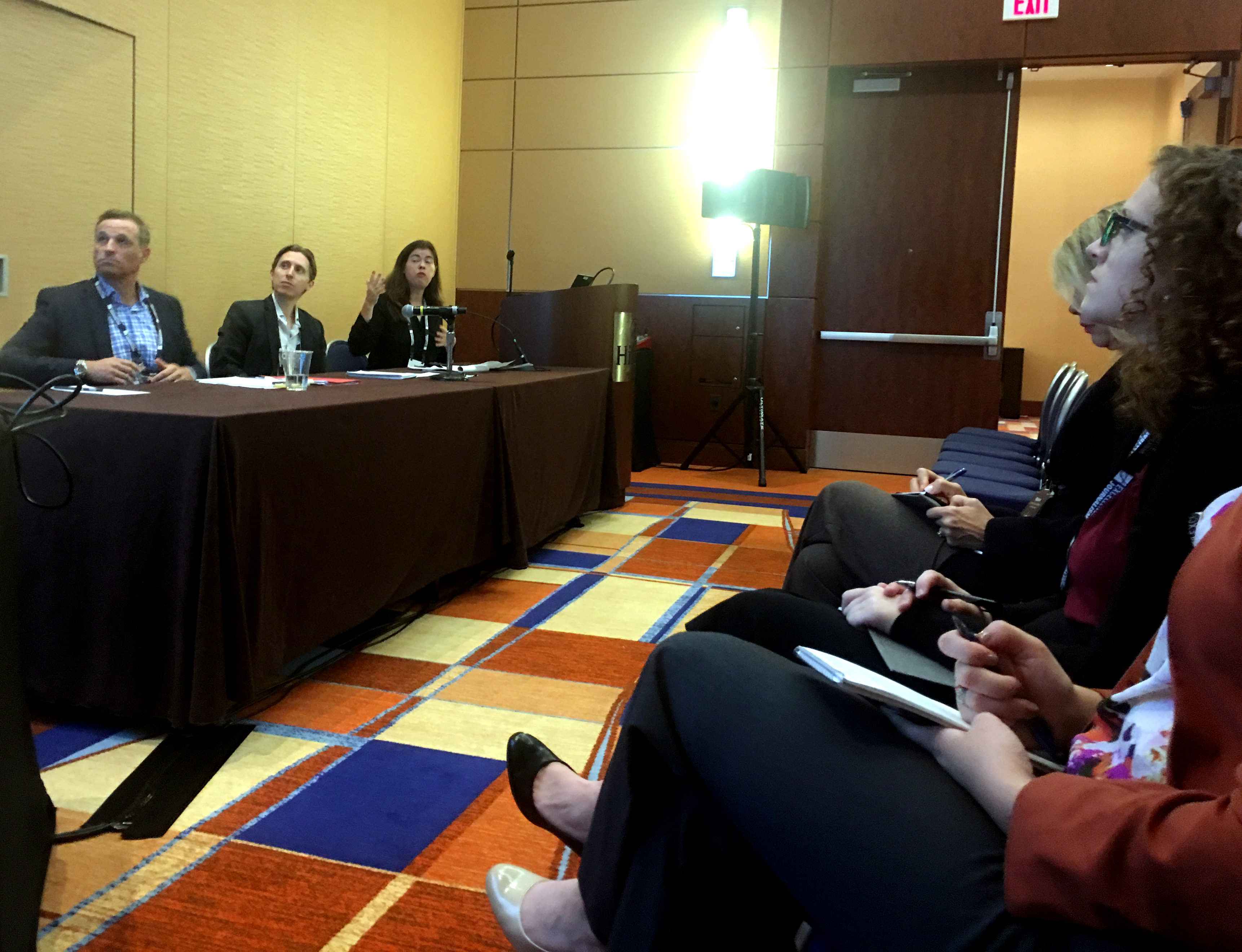 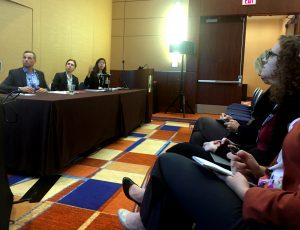 “How to FOIA” panelists, Mark Bailen, Jesse Franzblau, and Nell Greensfieldboyce give attendees tips on how to maximize their use of public information requests. The panel was the subject of controversy as it was sponsored by the Charles Koch Institute for $25,000. Local SPJ chapters expressed ethical concerns regarding the sponsorship given Charles and David Koch’s political activism. Photo by Kyle R. Cotton

Update: A resolution was passed by the Society of Professional Journalists delegates Saturday that would make the Sponsorship task force accountable to the delegates, by clearly establishing in writing a timeline for action.

Since Citizens United vs. The Federal Election Commission (2010), the Koch Brothers, Charles and David Koch of Koch Industries, Inc., have been one of the faces of donor influence in politics.

Their sponsorship, along with Sinclair Broadcast Group, Inc., at the Society of Professional Journalists 2018 Excellence in Journalism national conference has drawn ethical concerns from some local chapters.

The Society of Professional Journalists Greater Los Angeles Pro Chapter and The Chicago Headline Club have issued letters stating their concern about the Charles Koch Institute and Sinclair sponsorship, citing actions the sponsoring organizations and their associates have taken.

These actions include Sinclair’s practice of requiring its affiliates running politically driven content and the Koch Brothers Kochfacts.com, which before ceasing operation, would undertake campaigns to discredit journalists’ content.

“Let us be clear: SPJ should not take money from any group pushing a political agenda — regardless of where they fall on the political spectrum,” The Chicago letter said. “By allowing political groups to sponsor events at our gatherings recognizing free and unbiased journalism, we are legitimizing them and are giving them a platform to influence our members.”

“We must protect the integrity of our profession and take a hard look at our actions and decide now what the future will look like for our organization and share that vision with SPJ members,” the Chicago letter said.

The SPJ board declined to reject the sponsorship as it was too late to return.

Additionally, there were organizational first amendment concerns and risks of harming the organization’s relationship with RTDNA, which unanimously approved the sponsorship, said SPJ executive director Alison McKenzie in a response letter.

McKenzie also noted shrinking membership and said the organization should broaden their budgeting capability, rather than shrinking them because of politics.

Andrew Seaman, outgoing SPJ ethics committee chair, said the first amendment argument is rather weak, because journalists curate speech all the time in their reporting, deciding what is most relevant to the reader. Conferences should be able to do the same,  he said.

“The code of ethics says you should avoid conflicts of interest either real or perceived,” Seaman said. “We expect journalists to do this in their everyday lives I don’t understand why journalism organizations can’t exercise the same control.”

After public comment at Thursday’s board meeting from members of both the Los Angeles and Chicago chapters, a task force will be formed to address the policy that hasn’t been updated since 2003. 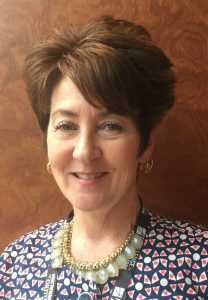 The sponsorship task force will begin work Sunday and is dedicated to getting member feedback on sponsorship from organizations with political baggage, said Patti Newberry, who is expected head the task force as SPJ president-elect — she is currently running unopposed.

“Whatever recommendation we make for a change on this I think will address any and all persons who would be willing to give us money,” Newberry said. “It’s important that we have the dollars we need to put on the best possible EIJ we can, but it is also important we are mindful of where those dollars come from and that we are not perceived as not adhering to our own standards on ethics, transparency and other bedrock journalistic principles.”

One of the challenges in addressing sponsorship will be the national conference partners, like RTDNA, and how the recommendations would work with those partnerships.

Task force is expected to give its recommendations Dec. 1, in order to implement a potential policy change for next year’s EIJ conference in San Antonio.

Previous story
Stress: A Day in the Life of a Journalist
Next story
Recent Layoffs Loom over Newspaper Industry
The SPJ News