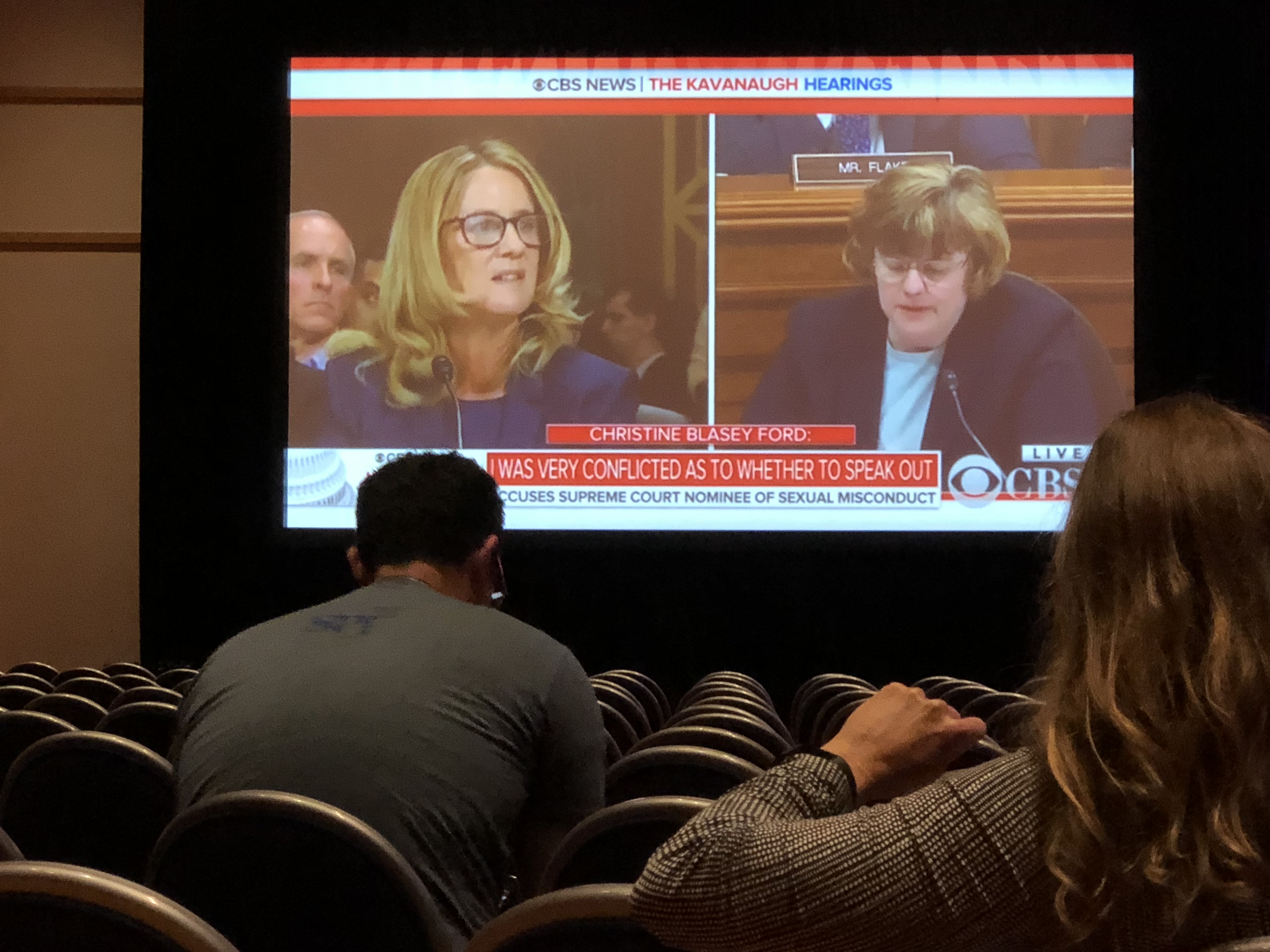 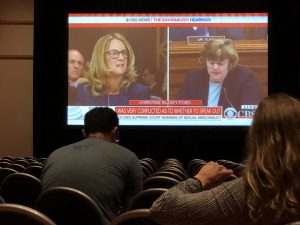 The streaming ended at 3 p.m. However Kavanaugh’s testimony began at around 3:15. The screening room was needed for a Super Session on elections. However, this did not hinder journalists and other media professionals from pulling out their mobile devices to watch Kavanaugh’s testimony. 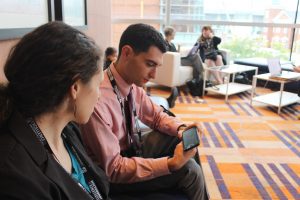 Attendees watching Kavanaugh’s testimony on their phones and laptops. 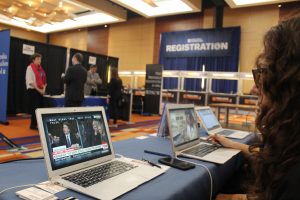 Though we found journalists willing to take questions about Ford’s testimony, few were willing to comment about Kavanaugh’s testimony. Some of them expressed concern it would reflect poorly on their organization.

“In this day and age, everyone should work from the the school of innocent until proven guilty beyond a reasonable doubt,” Jack Pagano, with Shamshad Radio and Television said.

The controversial nature of the issue also pours into newsrooms and their approach to coverage when evidence appears sparse and there are conflicting accounts.

Stories such as the Kavanaugh controversy usually start out the same: a person comes forward with allegations, then another and another, sometimes even amounting to dozens.

The beginning of the coverage can be the most difficult. The first accusation usually comes as a shock, and the accused often directly contradicts the accuser’s claims. Vonn Jones, News Director at KETV7 Omaha has had to decide how to cover these early allegations plenty of times.

“We first try to see if we can independently verify either side of the claim,” Jones said. “If someone just comes to us with a claim, we spend as much time as we can trying to vet it, and see if we can find somebody else to substantiate it, or some proof that it was said, proof that it was made. If it’s something that someone makes in a public forum, they’ve put that out there for public discussion, so all we can really do at that point is present what their contention is and we’ll not that we have no way to independently verify it, but it’s the claim they’re making. Then we’ll seek comment from the other side, and try and balance it as best we can.”

Jones makes the process sound easy, but not all claims are equal. Some accusers go public over Twitter, and some go to the police or formal complaints. The way accusers make their claims are crucial to consider while covering a story like this.

PJ O’Keefe, the Digital Director at WUSA9 in Washington D.C. has been covering the Kavanaugh case as it unfolds.

“It’s choosing language carefully,” O’Keefe said. “What does a sworn affidavit mean? What is it that we can report in such a way that establishes points of view versus accusations, versus even that politicization that gets thrown in there, and that’s a really hard thing to navigate.”

O’Keefe emphasizes the importance of the language that is used when covering these types of situations.

“We’ve had several conversations about consistency in what we’re writing, especially as they story changes and evolves, and when we have a new accuser,” O’Keefe said. “What are they saying, what have they done about their accusations, and being very clear cut with language. I think that’s the biggest challenge. We don’t want to mislead in any way, or report something as fact if it’s not a fact, or not reporting something with the gravity that a sworn affidavit carries, under penalty of perjury. We want to make sure that’s clear too.”

As the situation develops, the coverage needs to develop with it. The story of one accuser is different than a situation with many accusers. As each person comes forward, they change the narrative in some ways, corroborate the narratives of previous accusers, and create and expand upon a timeline of events.

David Louie of KGO-TV has been a reporter for 47 years. He is one of many reporters covering the Kavanaugh story for his station.

“We’re getting the information in bits and pieces,” Louie said. “Most reporters love to have a story that’s very easy to digest and get everything right away. We’ve also had pushback, we’ve had some problems with getting people to talk and trying to talk to Dr. Ford directly. This [the hearing] is the first time we’re hearing her speak directly, everything else has been secondhand.”

Louie believes Ford’s testimony is what is the most important in assessing the validity of the case.

“I think it’s really important to hear what she has to say, to hear the tenor of her voice,” Louie said. “She’s obviously very tense, she’s very nervous being in front of the senate judiciary committee, so the story hasn’t been fully vetted yet. It’s still a process. We don’t have all the details yet, and we still haven’t heard from Judge Kavanaugh.”

In the case of Kavanaugh and Ford is additionally messy. While many are comparing the case to Anita Hill’s accusations against Judge Clarence Thomas, Kavanaugh’s case involves sexual assault, rather than harassment, from three women now.

“Covering a story like this is very complex, but it’s also unprecedented,” Louie said. “It involves a nominee for the Supreme Court, it involves a very protracted process of hearing allegations but not knowing who the accuser was.”

During her testimony, Ford tearfully mentioned the emotional impact of having her name go public before she was ready for everyone to know her name and her story. Countless journalists were trying to contact her for interviews, people were harassing her family, and she had to move as a result of the publicity.

“I think it’s important for every victim of sexual assault to be able to be anonymous, otherwise people wouldn’t step forward in these cases when they feel something is at stake,” Louie said. “I feel it’s awfully important that we understand the sensitivity of the subject matter.”

Previous story
Are you an introvert? Here’s how to make the most of EIJ.
Next story
EIJ panels you don’t want to miss, by topics
The EIJ News