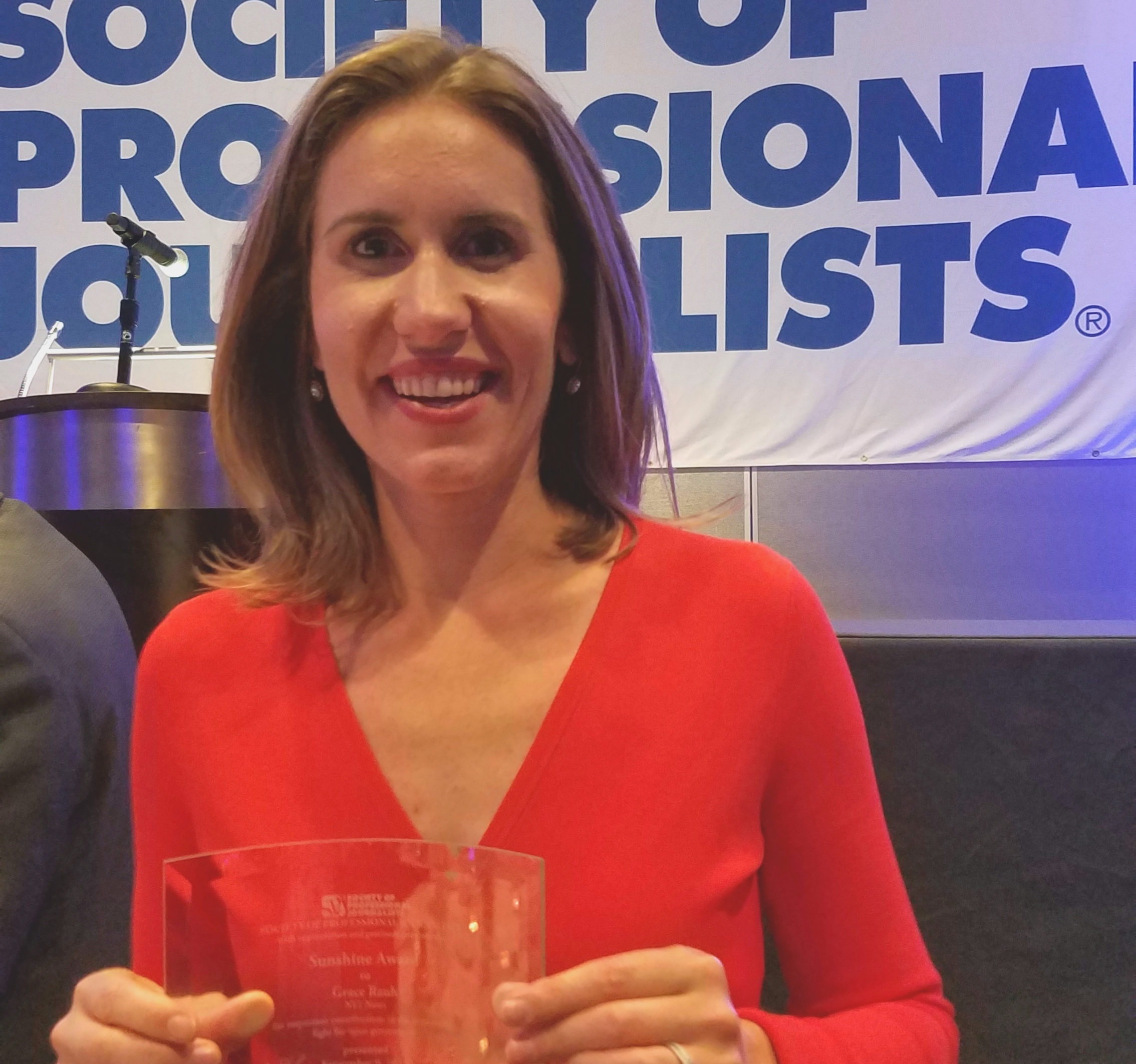 The Society of Professional Journalists held its closing dinner at the Excellence in Journalism conference with a strong statement defending journalism. The society awarded journalists from around the country for their contributions to ethics, scholarship, preparing the next generation, and government accountability.

Grace Rauh, a political reporter at Spectrum News NY1 won the Sunshine Award for her investigative reports on New York City mayor Bill de Blasio. The Sunshine award recognizes journalists for their important contributions in the area of open government.

Rauh is the lead plaintiff in an ongoing lawsuit titled Rauh v. de Blasio. She has been investigating New York mayor Bill de Blasio’s private consultant operations for over two years. De Blasio had hired people who were independent of the city for campaigning and program promotions who essentially began to be treated like city employees.

“The Sunshine Award is for us [SPJ], and specifically even for me,” said outgoing SPJ President and investigative executive producer Lynn Walsh, “something that is very important because journalists are doing this every day. We have to hold the government accountable, we have to ask questions.”

“It feels very important, it’s been a defining story of the mayor’s tenure at City Hall,” said NY1’s Grace Rauh, “and it’s also led to changes in the way the state defines lobbying. In the wake of my reporting, the state of New York broadened its definition of lobbying to include consultant like the ones that are close to the mayor.”

Rauh made a simple request for the release of the city government’s emails regarding the mayor’s consultants, but her requests were ignored and denied.

“I began to investigate the mayor and people with private interest of their own that led me to doing some big investigative stories but also to file a freedom of information act requests seeking emails between the mayor and his outside advisors.”

The Spectrum News NY1 newsroom is proud of the work Rauh is doing to bring government transparency to New York’s City Hall.

“Through determination, skill and a veteran’s eye for the truth, Grace uncovered one of the major stories of the de Blasio administration,” Senior Director of News at Spectrum News NY1 Anthony Proia said. “Her reporting continues to drive coverage of City Hall and inform regular New Yorkers about the highest echelons of New York City politics.”

Rauh won the lawsuit, which is now known as the ‘Agents of the City’ suit early in 2017, but the city appealed the ruling. At the time, the emails were released heavily redacted with black lines on nearly every other sentence. Rauh read what she could of some emails on the air on Inside City Hall with Errol Louis on NY1. The lawsuit is ongoing.

“This award really highlights the work that those people do to try to break through the barriers that exist and those ‘no’s’ that you get so that we can tell the public what they want,” said Walsh. “To honor someone who has not only gone through that first step of filing that public records request but then now continues to fight it, for something as basic as emails, that’s what we want to highlight.”

Rauh says she is honored to have been selected for the Society of Professional Journalists’ prestigious national award.

“It’s the first time I’ve actually won a national award. It feels like a huge deal,” Rauh said. “I think it’s very important in all levels of government for reporters to be fighting for transparency and to make sure we hold public officials accountable and make it clear that the people inside city government need.”

Honored to have won this award from @spj_tweets for my Agents of the City stories and @NY1 lawsuit over the mayor’s emails. https://t.co/0orkJaRail

Nick Budnick of The Portland Tribune and Miranda Spivack of the Center for Investigative Reporting were also honored with the Sunshine Award for their investigative reports.