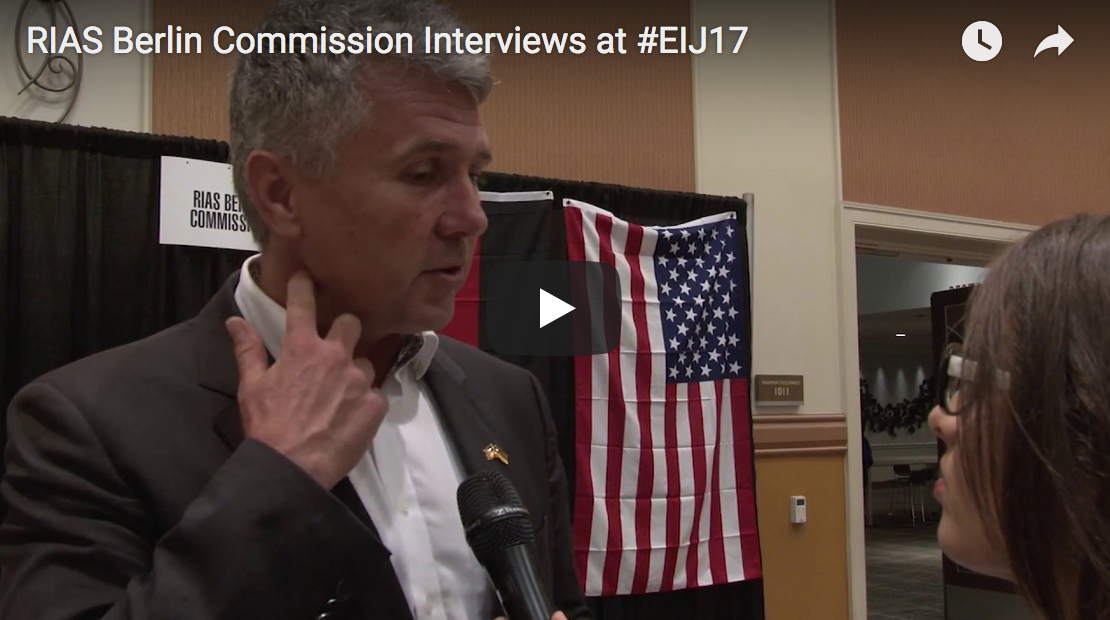 The Radio and Television Digital News Association (RTDNA) is celebrating a quarter-century partnership with the Radio in the American Sector (RIAS) Berlin Commission, an organization which serves as an exchange program between journalists in Germany and the United States.

The organizations met at #EIJ17 where RIAS Executive Director Erik Kirschbaum and alumni gathered to reminisce and network. They offered their unique perspectives to EIJ News about the neo-Nazi and white supremacist protesters who descended on Charlottesville, Va. which ended in one death.

“The big issue of Charlottesville is not necessarily what happened there,” said Kirschbaum. “It’s what the president said. Which was so unusual that the president seemed to show understanding for the neo-Nazis, whereas it’s not something you’d ever see in Germany.

The politicians in Germany were shocked that President Trump was talking about both sides. It’s not something anybody in Germany in their right minds would say,” Kirschbaum said.

The RIAS Berlin Commission, founded by former president George H.W. Bush was created during the Cold War in West Germany to strengthen relations and understanding between the two countries.

Alumni in the exchange program said it opened their minds to new ideas and different perspectives.

“It really broadens your horizons,” said Heather Sullivan, an anchor for WWBT in Richmond, Va. and a RIAS Berlin Commission alumna. “It broadens your awareness, it makes you more aware of what’s going on internationally, it gives you a much better understanding of the political issues between the United States and Germany, and really the entire world.”

Nazism in Germany today is treated very differently than in the United States. The history of National Socialism and the Holocaust are taught as part of the German curriculum in schools. Students visit a concentration camp or holocaust museum to learn history in a personal way.

Alexis Garcia, a producer at Reason magazine and a RIAS Berlin Commission alumna, says she witnessed the terrible violence in Charlottesville and believes RIAS helped her understand the conflict from a different perspective.

“Being part of this program kind of gave you a context for what this movement is about, what it represents,” Garcia said. “And in Germany, I think they have a very difficult task of how do we remember the past without necessarily celebrating or making sure that we don’t do something disrespectful that will give people the idea that this is something that could come back.”