Protesters call for the removal of Confederate monuments

Barricades now surround the Battle of Liberty Place monument in New Orleans after suspected vandals sprayed, “Take Em Down, KKK” at its base.

The tall, gray structure, nestled in a lonely corner of New Orleans’ French Quarter, is one of four monuments the city plans to remove. The New Orleans City Council voted 6-1 in Dec. 2015 to declare the structures “public nuisances” and symbols of white supremacy. 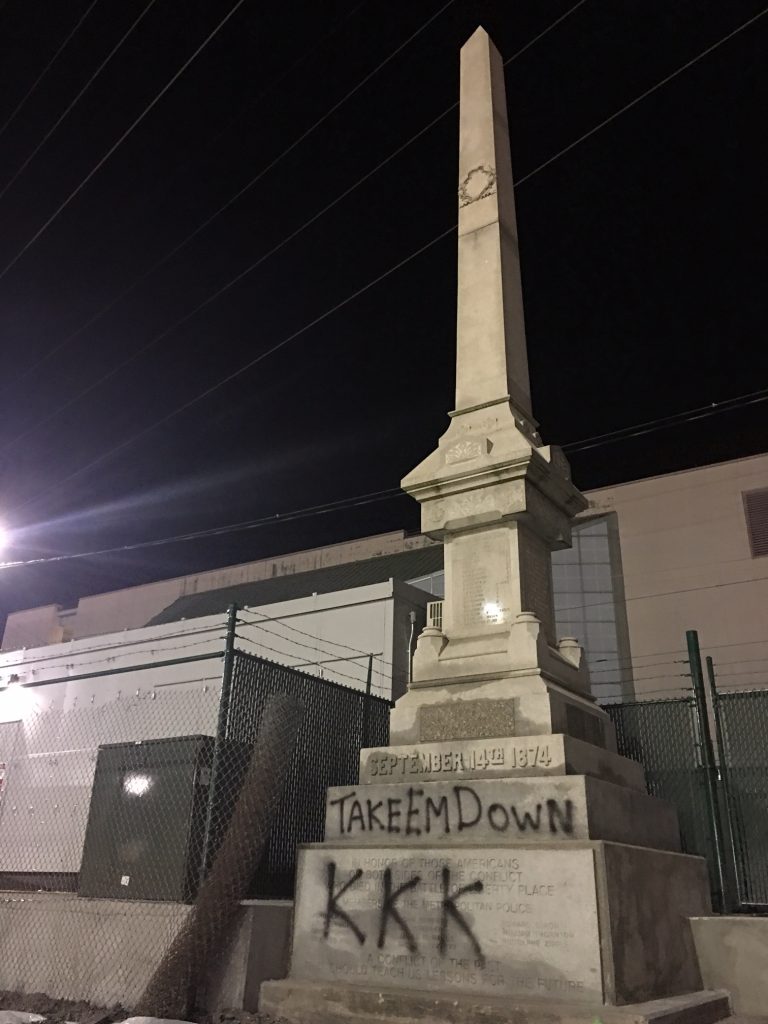 “This is but the first necessary step in clearing the public space of all symbols of white supremacy in New Orleans,” said Michael “Quess” Moore, founder of Take ‘Em Down NOLA, the group lobbying for the monuments’ removal.

The monuments include a bronze statue of Gen. Robert Lee, Confederate President Jefferson Davis, Confederate General P.G.T. Beauregard and a monument commemorating the Battle of Liberty Place, which occurred in 1874 when members of the Crescent City White League attacked the New Orleans Metropolitan Police.

But three months after city council’s decision, the U.S. 5th Circuit Court of Appeals ruled the monuments would stay up until constitutional and statutory issues are fully reviewed by federal appeals judges.

“This is a court, not a political body like the City Council,” judges wrote. “The only issue before the court is a legal one: Does the city’s newly passed ordinance violate plaintiffs’ statutory or constitutional rights?”

Hayne Rainey, press secretary for New Orleans Mayor Mitch Landrieu, said the city maintains its rights to manage its own property, though it respects the court’s order to keep the statues erect, for now.

“We understand that there are strong emotions surrounding this subject and we ask that any public demonstrations remain peaceful and respectful as they have since we began this process,” Rainey said in an email Tuesday. “When challenged, (the city’s) authority has been upheld in both federal and state court.”

Rainey expects the appeals court will eventually rule in favor of the city and allow officials to remove the monument, he said.

“The four monuments will be stored in a city-owned warehouse until further plans can be developed for a private park or museum site where they can be put in a fuller context,” he added.

Activists from the Take ‘Em Down NOLA group believe all statues in New Orleans that celebrate white supremacy should be removed, not just the four. The group will march Saturday from Congo Square to Jackson Square, demanding the immediate removal.

Meanwhile, the U.S. Court of Appeals will weigh merits of the district court’s decision on Sept. 28. By then, the appeals process could indicate whether the city will remove statues this year, the mayor’s office said.

The New Orleans Police Department would not confirm whether or not police are investigating the matter. Spokesman Tyler Gamble said the city is responsible for cleaning graffiti.

“We are monitoring the situation and are prepared to address any issues that develop,” he said.