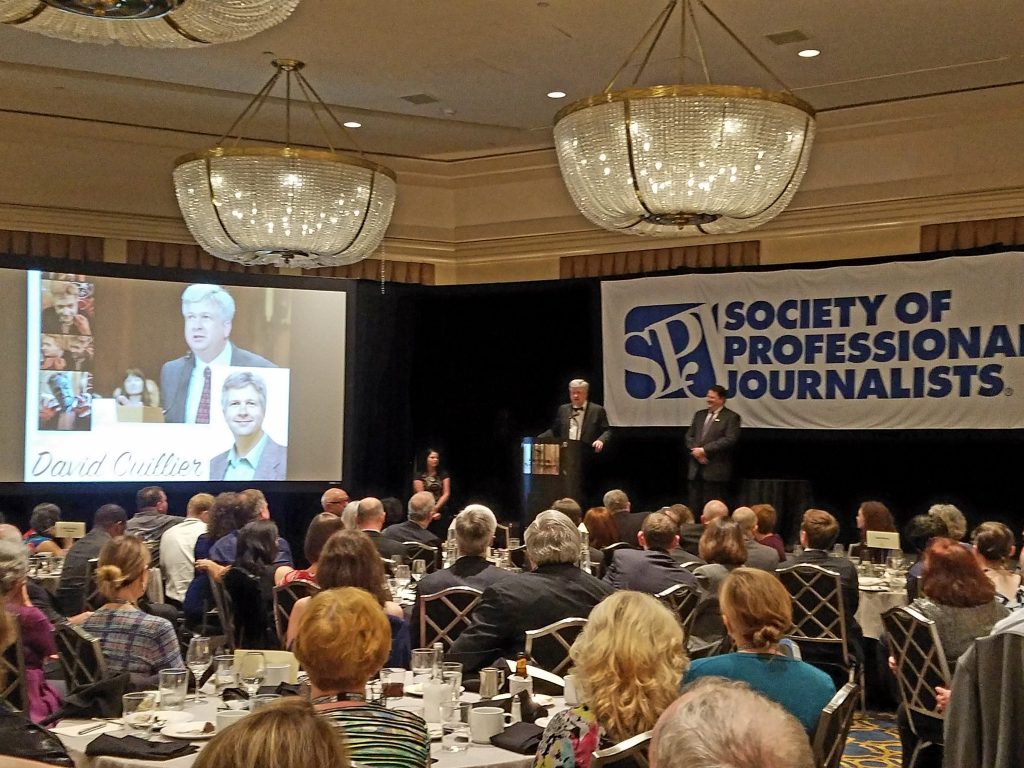 David Cuillier once drove about 48,000 miles in his car to “spread the gospel” of the Freedom of Information Act, according to his colleagues.

“He has this fire in his belly, which is inspirational,” said Rebecca Baker, the 2015-16 Society of Professional Journalists secretary and treasurer.

This evening, when the national SPJ presented Cuillier with its highest award, it came just three months after President Obama signed extensive FOIA reforms into law, marking a victory to Cuillier’s lifetime of championing press freedom.

Cuillier, a professor at the University of Arizona, served as the 2013-14 president of the SPJ, following years of teaching and reporting in the Pacific Northwest.

During his presidency, he appointed a committee to update the SPJ Code of Ethics, which had not been changed since 1996.

The changes to the code advocated for media transparency and added changes encouraging journalists to be cognizant of ethics and as accurate as possible.

Cuillier’s efforts to change the code and champion press freedom were harbingers of a much larger goal: Preserving the integrity and freedom of the press for years to come.

When Cuillier stepped into his presidency at the SPJ, he noted the professional organization could do more to support investigative journalists. At the time, the SPJ used a Legal Defense Fund, sustained by financial contributions, to dispense to journalists, providing them with legal help or financial assistance to defend the freedom of the speech and of the press. However, the fund was only as sustainable as its contributions, and it had been emptied in the past.

It has been a while since Cuillier drove across the United States advocating press freedom.

However, since then he has continued to fight for press freedom, testifying in Congress twice on behalf of FOIA, in 2010 and 2014, and inspiring Charles Davis, a colleague, to emulate his cross-country FOIA tour.

After their time in the field, Cuillier and Davis published “The Art of Access” in 2011, helping other journalists gain access to public records.

These small contributions all helped mount awareness and pressure to change federal laws.

When President Obama signed the changes to FOIA into law, it marked a triumph both for Cuillier and the chapter, which had joined a large media group entitled “Project Sunshine,” pooling resources to lobby in Congress for FOIA revisions.

The updated law brought large triumphs in the fight for government accountability. The law added a presumption that the government ought to disclose records to journalists and mandated a 25-year sunset on a disclosure exemption. The exemption was notorious for allowing government agencies to hide certain public records. In one of the most notable cases, it was used by the CIA to keep the draft history from the Bay of Pigs invasion from the press.

At this year’s Excellence in Journalism conference, Cuillier taught a breakout session on taking government agencies to court in order to get public records. This evening, Cuillier said he hoped to be continually involved in that fight, doing “good work for our community.”

“I’m going to keep doing this until I drop,” Cuillier said.