‘Making a Murderer’ – And Covering Him

The Netflix docuseries, Making a Murderer, has sparked national interest in Steven Avery who was convicted for the murder of Teresa Halbach in 2007.

Halbach was a photographer for Auto Trade Magazine and went to Avery’s property in Manitowoc County, Wisconsin to take pictures of the family’s salvage yard. Later that evening, she was reported missing.

But did the uncle and nephew do it? The Netflix original series suggests that Avery and Dassey are innocent and are being framed by Manitowoc County. Avery was convicted of the sexual assault of Penny Beerntsen in 1985 and served 18 years in prison. In 2003, he was proven not guilty and was released, and was suing the county for $36 million. Just as the lawsuit was reaching a settlement, Halbach was murdered and Avery was taken into custody. 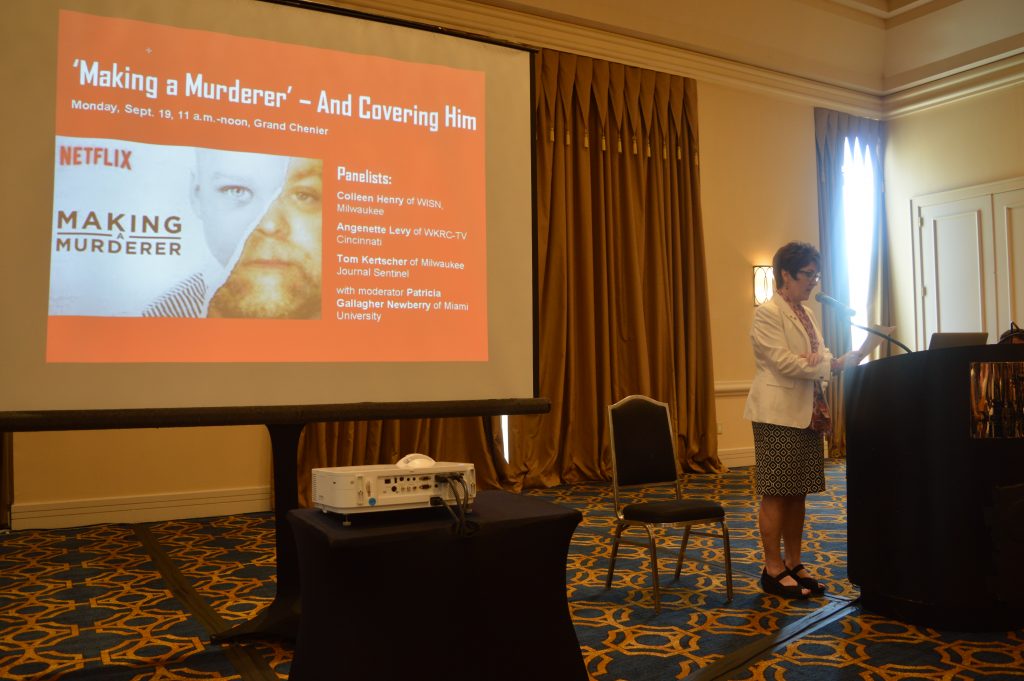 Three journalists who were near Manitowoc County during the trials weighed in on the series and what may have been left out.

Colleen Henry, WISN Milwaukee investigative reporter; Angenette Levy, WKRC-TV Cincinnati reporter; and Tom Kertscher, Milwaukee Journal Sentinel reporter all concluded that public opinion of the case would be very different had they sat through the day-to-day reporting of the trial.

The journalists had mixed feelings regarding the series. Henry’s initial reaction of Making a Murderer was that “Nobody is going to sit through this. This is really slow.” Kertscher said he live tweeted while watching and found himself wondering if he had missed something due to the fact that his experience with the trials was so much different than from what was being portrayed.

Panelists and reporters Colleen Henry, Tom Kertscher and Angenette Levy discuss covering Steven Avery in the Wisconsin local media. Avery is the focus of a Netflix docuseries that follows his wrongful conviction of sexual assault and exoneration 18 years later. PHOTO BY: SaraRose Martin

“This was framed as Steven Avery’s story,” said Levy. “You are getting a heavy dose of what his defense attorney was arguing in court.” Kertscher noted that the documentarians were heavily embedded with the Avery family. “If they had been embedded with [Teresa’s] family, it would have have been a different feel.”

They agreed that one key component that was not addressed in enough depth was Avery and his family’s extensive criminal history which included a pattern of domestic violence and sexual assault. “Steven Avery had a past before 1985. There was a reason he was a suspect in that case,” said Henry, alluding to his wrongful sexual assault conviction.

Henry, Levy and Kertscher acknowledged that the Avery family was not very responsive with reporters during the trials. Levy noted that when she would call, Steven’s mother would hang up on her. Henry said that her station also did not get much response from the Halbach family.

Making a Murderer proposes that police framed Steven Avery by placing Halbach’s car keys in his bedroom and using an opened vial of blood they had obtained and dumping it on Halbach’s vehicle. Henry and Levy were both unaware of just how heavily involved the Manitowoc county sheriffs were in the investigations. Kertscher said they were involved when they should not have been, due to Avery’s settlement from his wrongful conviction.

Dassey’s conviction has been overturned, largely in part to Making a Murderer. It is still undecided whether he is guilty or innocent but because his rights were violated in the interrogation process, he was ordered to be released.

“Having sat through the entire case, I felt as though the jury could have gone either way,” Henry said.

Henry offered advice to journalists who may need to cover controversial issues, like the Avery case. She said to learn about freedom of information, request search warrants and court records, and read these documents as much as possible.

Season 2 of Making a Murderer is in the works. Levy notes that viewers will see more from the Halbach’s, who did not grant interviews for the first season.

Previous story
Director of SPLC discusses first amendment challenges facing college journalists
Next story
A**holes in the News Room: Did You Study for the Test?
The EIJ News