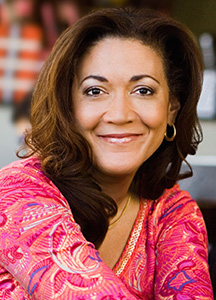 Let’s have a conversation about race.
Journalist Michele Norris will be there to listen. At least, she was during a panel at the Society of Professional Journalists’ Excellence in Journalism Conference to discuss her initiative, The Race Card Project.
It’s all about point of view, she said. Creating a conversation with the help of storytelling, experiences and feedback folks entrust to her. It’s a conversation more newsrooms need to have.
“I’ve never had conversations this deep as a journalist before in my life,” Norris said.
Beginning as a conversation starter, the journalist created post cards for people to write six words about their thoughts or experiences about race. As it turns out, the conversation was already there, it was the platform for people wanting to be heard that was missing.
For everyone involved, the most memorable cards vary depending on the individual, Norris said. But there are many that she’ll never forget: “Black babies are cheaper to adopt;” “Grandma gave me $100 when we broke up.”
“Those are the kinds of things that make me ask more questions,” she said.
For example, was grandma a racist or proud of her heritage? Was she simply trying to cheer up her grandchild?
“For me, the pride in the craft revolves around the really small things,” she said.
But it’s not just race, its cultural differences that make people feel ostracized from society, as well, like Appalachian accents, hair color, ethnic backgrounds or heritage.
“That really easy laughter on a rural accent would make some people uncomfortable,” she said.  “I’m more in tune to those types of things because of this project.”
Now an independent project, Norris said she hopes the project finds a more permanent home, becoming an archive of conversations about race and cultural differences.
The NPR journalist’s eye for detail, risk and societal differences or issues is part of the reason the Society of Professional Journalists honored her by awarding the Fellow of Society Award at the year’s national conference. The award recognizes journalists work based on their contribution to the profession and society itself.  The first award was handed out in 1949 to three journalists. Last year, Al Martinez, three-time Pulitzer Prize winner from the L.A. Times received the award.
“I’m over the moon,” Norris said. “To receive an award like this from my peers in the industry and SPJ is an honor beyond measure.”
The award, she said, recognizes her ability to take a risk in an uncertain industry and for brining people together. Starting out in broadcast with her own show, the journalist changed direction and has worked for ABC, The Washington Post, The Chicago Tribune and Los Angeles Times. She also published her first book in 2010, “The Grace of Silence: A Memoir.” The University of Wisconsin and University of Minnesota in Minneapolis alum won an Emmy award for her coverage of 9/11 and has been recognized by NABJ, Essence Magazine and Ebony Magazine.
“At this part of my career, (the Fellow of Society award) is particularly special,” Norris said.
Norris’ producer and a Senior Producer at NPR, Walter Watson, wasn’t surprised to hear the reporter’s work was being recognized, remembering the single word he sent in an email responding to the news: “wow.”
“It’s been some of the best work of my life. Telling these stories is a huge responsibility,” he said. “Having stood on the stage with her for the Peabody, I think it’s a fantastic tribute for a fantastic journalist.”
Norris was given a plaque and a jeweled key for her efforts on Sept. 6 at SPJ’s President’s Reception during the year’s national conference.

Previous story
SPJ Election Results
Next story
Minority Reporters: How Race And The Media Should Interact
The EIJ News