Described as a pioneer for her work in broadcast television, Belva Davis was honored by the Radio Television Digital News Association Sunday evening at Excellence in Journalism 2013 with the John F. Hogan Award.
Davis, the first black female anchor on the West Coast, made her debut in 1963 at KTVU-TV in the Bay area. She spoke about the people in her life who helped her succeed in her career.
“All were part of the building blocks of welcoming a black woman into the industry,” she said.
She recalled how her first husband, Frank Davis, stayed at home and took care of their two kids while she started her career as a news anchor.
Davis said there was an unlikely cast of people who helped her, including Frank Sinatra, who gave her an exclusive interview at a crucial time in her career. 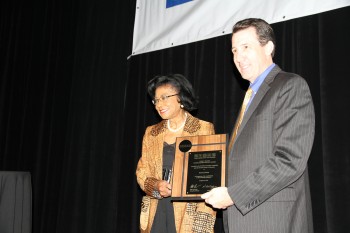 There are many issues that need to be addressed today as well, she said, such as how to cover Latino, Asian, and LGBTQ issues. We need to learn, she said.
“The fact that I am standing here is biggest sign of change. We must all stand together and support each other. I want to thank you from the bottom of my heart. It couldn’t have happened anywhere else but America,” she said.
Previous story
Eva Longoria Hosts Panel on Latino Vote
Next story
PHOTOS: RTDNA honors two for a lifetime of Excellence in Journalism
The EIJ News